Planning on visiting Bodh Gaya's Mahabodhi temple? If you are planning a spiritual vacation to this peaceful and tranquil Buddhist pilgrimage, here is a handy travel guide to help you make the best possible plans.

Bodh Gaya, also known as Buddha Gaya, is a small town of spiritual and religious significance in the Indian State of Bihar. Situated slightly west of a Ganges tributary, Bodh Gaya is one of the holiest pilgrimage sites by the followers of Buddhism, though it is an equally important religious site for Hindus in India. 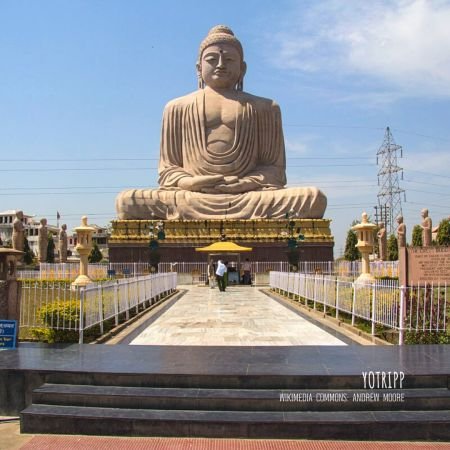 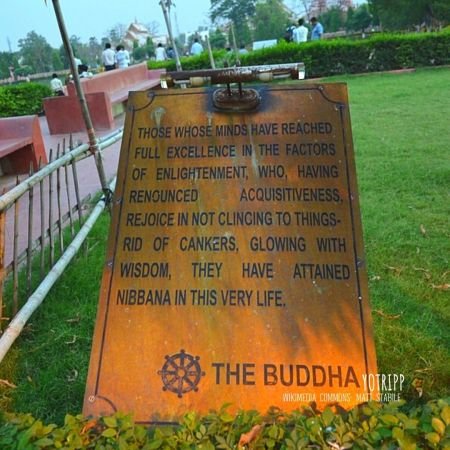 Bodh Gaya is a religious site in the state of Bihar, a holy pilgrimage site for both Hindus and Buddhists. For Buddhists, it is one of four major pilgrimage sites, with Kushinagar, Sarnath and Lumbini being the other three.

The Mahabodhi Temple in Bodh Gaya is said to be the location where King Siddharta (later, Gautam Buddha) attained his spiritual enlightenment (Buddhatva), on what is known as Buddha Purnima in the Hindu calendar month of Vaishakh (April-May).

Though the name Bodh Gaya did not come into existence until the 18th century, Bodh Gaya as a place has frequented by pilgrims from as early as the 7th century, as documented by Faxian Chinese pilgrims. Since 2002, the Mahabodh temple complex has been declared a UNESCO world heritage site.

Who Built the Mahabodhi Temple? 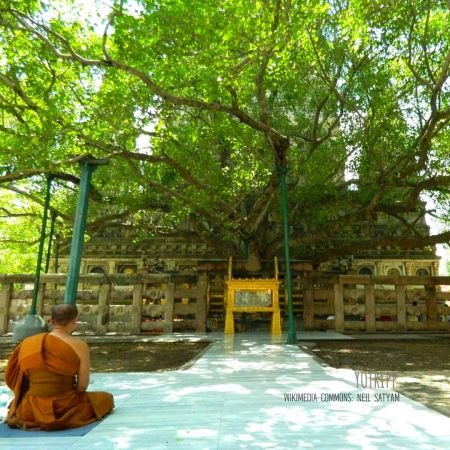 The very first temple in Bodh Gaya was a simple shrine built by Emperor Ashoka in the 3rd century BC. The present brick temple is said to have been built during the Gupta period, sometime in between the 5th and 6th centuries, though there seem to be various different accounts regarding this timeline.

The Mahabodhi temple is not a stand-alone temple, but a large temple complex. Though the main temple is the Mahabodhi temple stupa, other places of import within the temple are the Vajrasana, the Bodhi tree and at least six are scared sites. The 54m high main temple, despite seeing several renovations and restorations, still retains all its representations of Vedic gods, namely Surya and Indra. The temple has several carvings of imaginary animals too, believed to have been the protectors of the temple.

You can know more about the temple through this enlightening documentary by Goh Fe Choo. You can follow his stories on Buddhism and more.

What are the Top Things to Do Within the Mahabodhi Temple Complex? 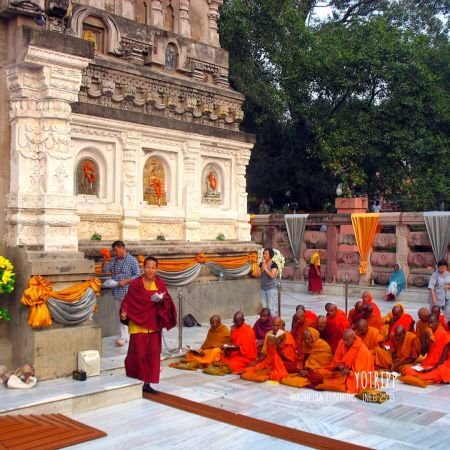 Retrace The Steps of Lord Buddha 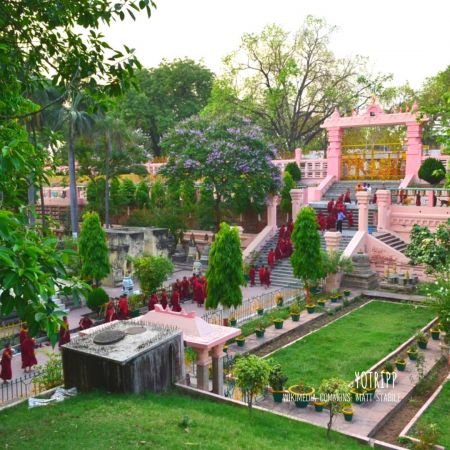 The large area of the Mahabodhi Temple complex is a delight to walk through. As you walk through to the complex, you are said to be retracing Buddha's steps as he walked through the temple chanting mantras. Even after he achieved enlightenment, it is widely believed that Lord Buddha spent about 7 weeks medicating within the actual Mahabodhi temple. To retrace his steps, you need to follow the following sequence: Bodhi tree, Animeshlocha Stupa, Ratnachakrama, Ratnaghar Chaitya, Ajapala Nigrodh Pillar, Lotus Pond and Rajyatana Tree.

During his first week at Bodh Gaya, Lord Buddha spent his time under the Bodhi tree. Though the original tree was cut down several times, the fifth descendant of the original tree still stands here today. It is said that Lord Buddha meditated here for days on end without moving from his seat.

The Animeshlocha Stupa or the 'unblinking stupa' was the spot where Buddha sat in one spot and stared unblinkingly at the Bodhi tree. He was at the Ratnachakrama during his third week here where he paced back and forth between the stupa and the Bodhi tree. It is said that wherever he walked, lotuses bloomed. Today, the path is decorated with raised stone lotuses, symbolic to that legend.

What are the Other Things to See in the Mahabodhi Temple Complex? 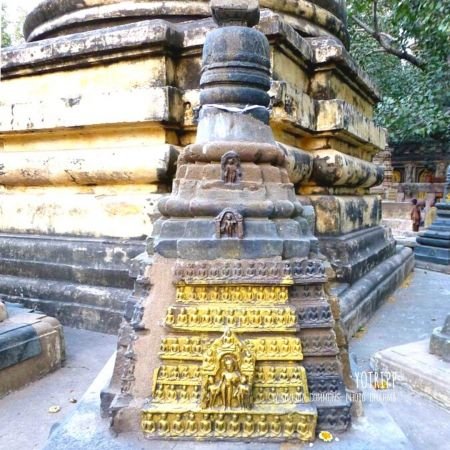 An Archaeological Museum next to the Mahabodhi temple is operational from Saturday through to Thursday between 10AM and 5PM. The museum was set up in 1956 and has a large and interesting collection of Hindu and Buddhist relics from past centuries, including stone sculptures, terracotta items and even ancient coins.

The Bodhgaya Multimedia Museum, next to Mahabodhi temple, depicts the life of Lord Buddha through displays segregated in four distinct sections. The museum displays and educational crash course from as far back as 2500 years ago with the use of technology, especially video and animation. The museum is open between 7AM and 12PM and again later between 2PM and 6PM on all days except Friday.

A little way away from the Mahabodhi temple is an 80 feet giant Buddha statue, inscribed with the words 'spread Buddha's rays to the whole world'. Entry to the statue complex is allowed between 7AM and 12PM in the mornings and 2PM to 6PM in the afternoons (5:30PM in winters). This gigantic Buddha is a landmark sight for Bodh Gaya visitors.

There are several other temples around the Mahabodhi temple, namely the Tibetan and Burmese temples in the north, the Chinese temple to the West and the Thai, Bhutanese, Japanese and Tibetan temples to the south-east. Out of these, if you are short on time, we recommend that you pick the Japanese temple with its beautiful and peaceful gardens, the Taiwanese temple that showcases brilliant Chinese architecture and the Thai temple with its uniquely Thai accents.

Just a bit further from the Japanese temple is the Daijokyo temple. This temple has no entrance fees and is recommended for children who wish to learn a few things about Buddhist history. The garden is very well maintained and has lots of spots to sit and relax or take a meditation break.

When to Visit Bodh Gaya? What Are The Important Events Held at Bodh Gaya?

Bodh Gaya is tourist-friendly all year long. So much so that an entire tourist industry thrives here all year long, with plenty of world-cuisine eateries, shopping streets and even accommodation available all year long. Despite the year-long appeal of Bodh Gaya, there are three main events that draw in large crowds here.

In December or January, Bodh Gaya celebrates the Kagyu Monlam Chenmo, which is a large prayer to celebrate the start of a new year by the Tibetan calendar. Similarly, there is another prayer festival in January-February known as the Nyingma Monlam Chenmo. If you want to experience the true spiritual and religious vibe of Bodh Gaya, try to attend any one of these three annual festivals held here.

What are the Important Dos & Don'ts at Bodh Gaya? 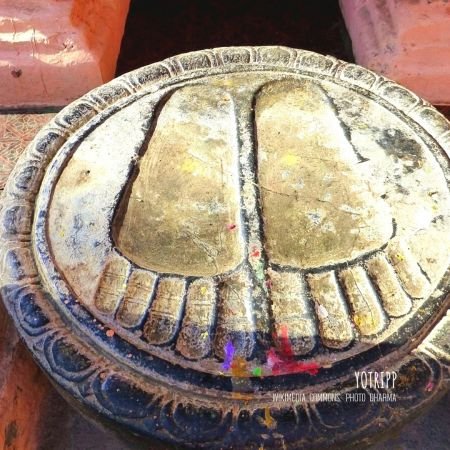 In line with most religious places worldwide, there are a few dos and don'ts while you visit Bodh Gaya.
Remember to dress conservatively (loose clothing that covers the arms and legs) and remove your footwear before entering any religious complexes.

When you do a pradakshina (circumambulation) of the holy stupa, do it in a clockwise direction only.
Do not touch, vandalise or disrespect any of the statues and sacred objects within the complex.

Due to the strict security at the temple complex, mobile devices, laptops and other such equipment are not allowed inside the premises. If you carry a proper camera, it may be allowed inside, but only in places where photography is allowed.

Cows are sacred to the religious communities here, they roam freely inside the complex as well as in the city. Be alert to their presence and do not try to shoo them away or strike them.

Be alert to beggars who are impossible to miss here since tourists are generally considered benevolent.

How to Reach Bodh Gaya? 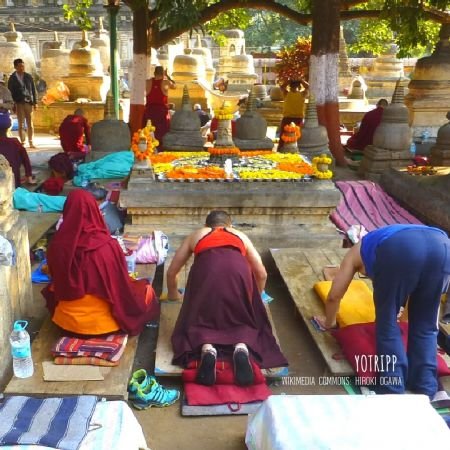 The most convenient way to get to Bodh Gaya is by rail or air.

Gaya Junction is the nearest railway station and that is about 13kms away from the temple complex. But getting a connection to the temple using a rickshaw, taxi or bus is fairly easy as the commute is cheap and available.

Gaya airport is about 17kms away from the temple complex but this smallish temple is only connected with large metros such as Kolkata, Mumbai and New Delhi. If you come in from any other city, you may need to take connecting flights. Patna and Varanasi are the other two airports that are are a 3-hours and a 5-hours drive respectively from Bodh Gaya Town.

When you are sightseeing within Bodh Gaya town, you can use auto-rickshaws as a fast, cheap and convenient mode of transport.

What are The Other Attractions in Bodh Gaya? Where Can I Go After Visiting Mahabodhi Temple? 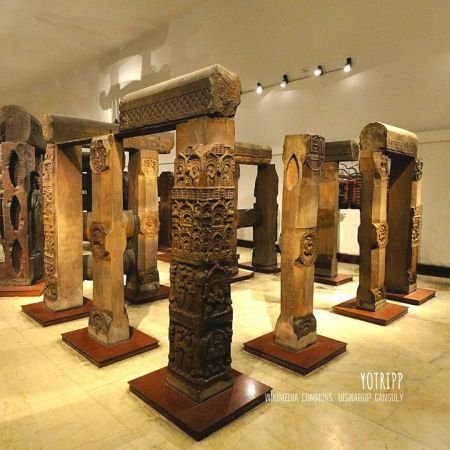 There are several attractions in and around Bodh Gaya, apart from the Mahabodhi temple shrine, the temple's inner walkway, the temple's outer walkway and the several museums and smaller temples within the temple complex.

In the hills that connect Bodh Gaya to Rajgir, the ancient capital of Magadha, there is an important cave site known as Mahakala Caves. This site, some 5 odd miles from the Sujata Stupa within the temple complex is said to be another location where Siddharta meditated before he attained enlightenment.

Nalanda, that most know to be India's most ancient University, was established in 450CE. Today, though this historic site is one of extensive ruins and no inhabitants, is still a compulsory tourist stop for visitors in the region. The site also has a Nalanda Museum which is open between 10AM and 5PM on all days except Fridays.

Gridhakuta or Vulture's Peak is located in the neighbouring city of Rajgir. This is where Siddharta is supposed to have stayed and given teachings on Mahayana to locals. There is also an ancient Buddhist monastery nearby names Venuvana. Rajgir is also known for its freshwater hot springs, and these are open to the public.

Rajgir has its own city sightseeing bus service, though you should not expect fancy, open-top buses here. These buses depart from Rajgir and not just cover important attractions in this city, but also cover some interesting attractions in Nalanda. These buses work on a day-trip basis where you depart at 8AM and are dropped back at 7PM and have very affordable ticket prices.

They are the cheapest and most convenient (since neither the roads nor the directions are convenient for making your own private trips) way for sightseeing around the city and yet sadly, very few tour operators will inform you about them.

At just under a 2-hour drive from Bodh Gaya, which is albeit a bit too far, is an old sun temple in the town of Deo.

Both the big cities are a few hours drive from Bodh Gaya. While Varanasi is a bit further away, Sarnath, one of its suburbs, is another major pilgrimage site for Buddhists. So many religious tourists who come for spiritual holidays combine Bodh Gaya with Varanasi as a multi-city tour.

And before you leave this blog page, don't forget to check out these 6 spiritual places in India that you can and should visit as well. Who knows, one of these might be closer to you than you think.

Sayali Bedekar Patil is a digital strategist who loves to build brand stories over social media. She is a travel addict that never goes anywhere without her laptop. She is a mother of 1 and has a secret desire to pet all dogs in the entire world. Oh an did we mention, she loves to review hotels! 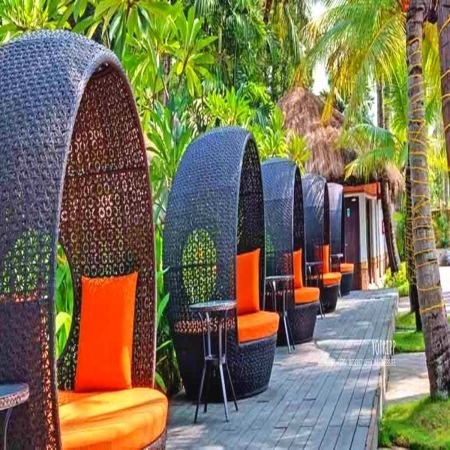 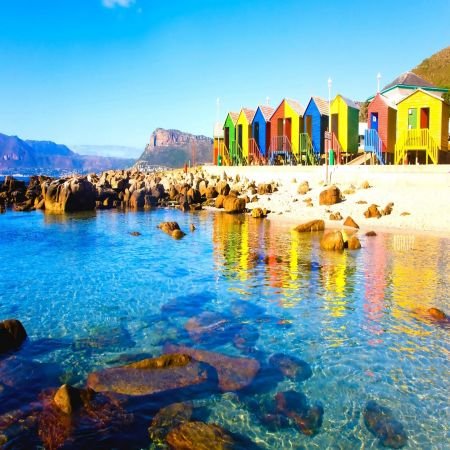 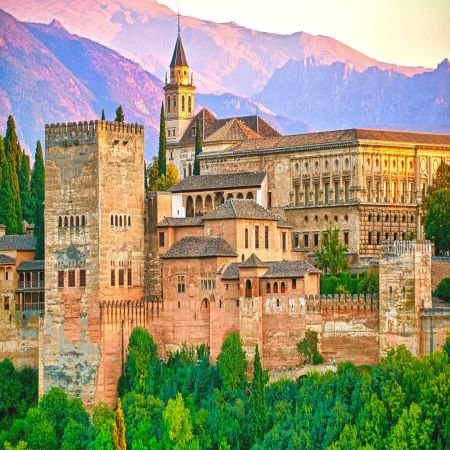